Our two weeks training and racing in Helsinki, Finland provided us with stiff competition, beautiful sailing conditions, and lots and lots of midsummer daylight. At this time of year, it doesn’t get dark until after midnight and the sun comes up again just after 3 am!

We took a 27-hour ferry from Travemunde, Germany to Helsinki. We spent our time on the ferry playing card games, watching the USA vs BEL World Cup game, and enjoying the onboard sauna. After some cardio, we did a circuit workout on one of the side decks. There was a perfect cooling breeze 🙂 Unfortunately just before we left Kiel, Paris’s wisdom teeth got infected badly and were causing her a lot of pain. No fun! But Paris took great care of herself and was a real trooper when it came to practicing even though she was in a lot of pain. Luckily they healed a couple of days before the regatta started.
We have a funny story about arriving in Helsinki and rolling off the ferry. Before you can leave the ferry terminal, all drivers must be breathalyzed since the ferry serves alcohol. In Finland the steering wheel is on the left side of the car, just like the US. But we hitched a ride with Duncan from Ovington Boats (thank you Duncan!), who has a British van, meaning the wheel is on the right side. So we pull up to the police who are handing out the breathalyzers. Paris is sitting on the left, I’m in the middle, and Duncan is on the right since he’s driving. The officer gave the breathalyzer to Paris and motioned to her on how to use it. We kind of gave him a funny look, expecting him to tell her to pass it to Duncan. But she blew into it, gave it back, and he waved us on to pull forward, so away we went! Duncan never got breathalyzed and to this day I wonder if the officer realized that he let us slip 😉 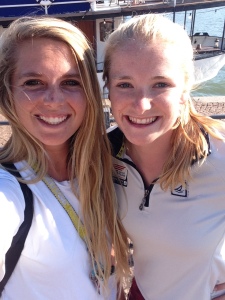 We trained for six days straight before the regatta, wanting to make the most of our time with a new coach, Ramón Oliden. Ramón coached Lange-Camau to a bronze medal in Athens 2003 and Martinez-Fernández to a silver medal in Beijing 2008. Since our long-term coach Luther Carpenter (Senior Olympic coach for US Sailing) was taking some time off between coaching several events, we are really grateful to US Sailing for hiring Ramón for this event. Our training days were generally very windy. On a lighter wind day, fog came in hard and we couldn’t see more than 50m ahead of us. On the final few days before the racing we were able to do lots of short practice races with about a dozen international teams.

Race day 1 was picture-perfect. Sun, blue sky, 7-12 knots, flat water, and two FX fleets totaling 51 boats! Four races of three laps each left us a bit dizzy but we were still able to make smart decisions and sail fast. We had course A, the closest to shore, figured out. We ended the day in 9th overall, thrilled to be in the top ten at a major event.

Race day 2 was glassed off. No wind at all. The race committee called off racing in the early afternoon and we spent the rest of the day exploring the rocky archipelago by coachboat. It’s a beautiful and unspoilt area.

Race day 3 was the complete opposite. 18-22 knots with puffs to 25! We were in 3rd in the first race but capsized on the last lap and finished 13th. Unfortunately then we hit rocks very close to the race committee. We had studied the charts but the shallow area was so small that it was hard to place in context of the bay and the buoys marking the area were too small to see. The impact really messed up our daggerboard, pushing it up and wedging it into our hull while also taking a sharkbite chunk out of the bottom edge. We had to race the next two races with the daggerboard only half way down which makes the boat slower and harder to control. We were able to finish 13th again in the second race (without a stern plug, to make sure the boat was not leaking!) but maybe all these 13ths were an omen – too many capsizes in the third race so we retired in order to be ready for the fourth race (turns out there was no fourth race – oh well!). So maybe carrying the boat sideways out of the water and cutting the daggerboard with a knife was not what we had planned for the day, but…  at least the hull was undamaged and we were able to buy a replacement daggerboard. I’m proud of how we stayed positive and productive all day! This was the last day of the qualification series and fortunately our solid first day left us a cushion for this disastrous day so although we dropped to 17th place, we still comfortably made it in to Gold fleet (top 26 boats).

Race day 4 was significantly less hectic. A beautiful Helsinki summer day – 10-16 knots, but very shifty and puffy which made for tough racing in Gold fleet! The close fleet made any mistakes very costly. Our best race was a 9th place in the third and last race of the day. We had changed our mast bend for the last race and it helped a lot. The best tactics is speed, right?!

Race day 5 was really challenging for us. Although we had pretty good starts, we had trouble figuring out how the breeze was shifting in different parts of the racecourse. We also made costly mistakes at the windward mark where a split-second of indecision resulted in other boats taking our wind and passing over us. We dropped to 22nd overall and took lots of lessons on strategy and tactics from the day.

Race day 6: Medal Race day. The breeze was on and we had one theater-style race (meaning extra close racing!) but unfortunately we went from 2nd to 9th in that race by messing up a couple of crucial maneuvers. This puts us 23rd overall, and 20th all-female team. We are disappointed, especially since we started the regatta so well, but we are happy to be improving and consistently battling with the best in the world at every regatta this season. Congratulations to Ida & Marie for their victory!

Results: http://49er.org/event/2014-european-championship/
Next up is defending our title at Nationals in August, and then Worlds in September. Ten of the 20 Olympic berths are up for grabs at the World Championships this September, and they will go to the top 10 countries. We were the 13th country so we are right in it!

Thank you to Camilla Cedercreutz, our Finnish FX friend and competitor, for the awesome apartment and bikes. Also thanks to the Cedercreutz family for a wonderful dinner, including my first reindeer pizza! Thank you to our coach, Ramón Oliden, for his help and support throughout the event, especially when we had to fix the daggerboard. We love Ramón’s sense of humor and his experience and perspective are really valuable to us. Thank you to Duncan and Ovington Boats, and our Singaporean competitors, for letting us (and the boat trailer!) hitch a ride from Germany to Finland – that was crucial. Finally, thanks to Stuart Appleby for selling us his spare daggerboard when we really needed it.

Big thanks to the US Sailing Team title sponsor, Sperry Top-Sider. Our Sperry Top-Sider clothes were perfect for the weather which fluctuated quite a lot throughout the day and day-to-day. Thank you to Harken and McLube for keeping our boat fast!