The Rio Test Event was a tough one for us and we have lots of lessons that we are implementing in time for our next event, the 2015 World Championships in November. 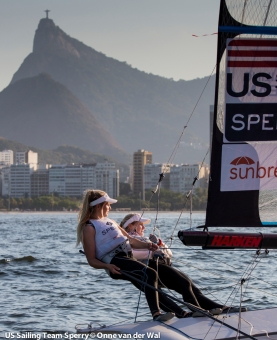 The Test Event, also known as “Aquece Rio International Sailing Week,” or referred to as the “Pre-Olympics,” is a run-through of the sailing at the Olympic Games. It is scheduled exactly one year before the Games and allows the athletes and organization to evaluate what is working well and what needs to be improved over the remaining year.

Just like the Pan American Games in July, there is only one boat per country allowed. We had qualified as the USA representatives by performing the best at Sailing World Cup Miami and Trofeo Princesa Sofia (Palma) in January and April, respectively. 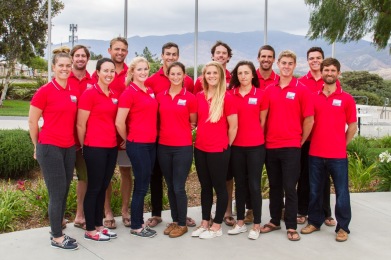 Conditions were mostly light winds throughout the event, with a couple of races in a medium breeze. The current varied in strength throughout the week and would even change a lot during each race. It’s fascinating to study the patterns and apply them to the racecourse, which is something we will continue to improve. Guanabara Bay is the most complex venue that we have raced in, and we are excited to rise to the challenge over the next year.

In the first race of the regatta we did not execute the start well and struggled to catch up, but in the next two races that day we scored midfleet results due to some mistakes that we learned from. It became clear that although it was a small fleet of 19 boats, it was going to be close racing. The next three days were plagued by light winds which did not allow the racing to stay on schedule, so in three days we only completed four races (usually we race three per day). 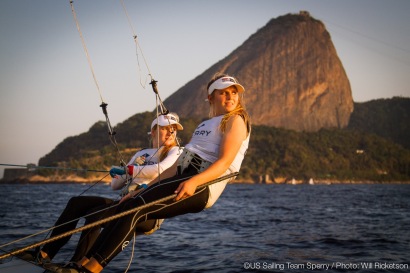 If you have looked at the Results, you may be wondering why all but 3 boats are scored DNF/”Did Not Finish” on race 9. On the final day of the opening series we raced on the Pao de Acucar (Sugarloaf) course, which is the medal race course and it is closest to shore. It was very puffy and shifty on this day, and in that race there were huge lulls that covered the course and lasted several minutes. We were fifth in that race but since the wind died, we missed the time limit by less than 10 seconds. It was frustrating to sail well and not have it count. 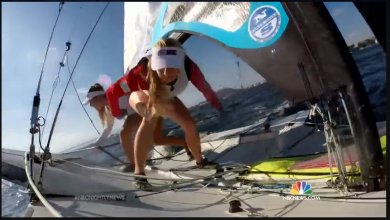 However, there are still many things we can control and will improve on. In the last race, we port-tacked almost the whole fleet, executing our game plan and allowing us to sail to a third place finish. We were happy to end on this note, sailing assertively and confidently.

The sailing venue is still under construction, so while we do not know what it will feel like, one thing is for certain: sailing in Guanabara Bay, surrounded by Pao de Acucar, the green hills, and the Christ the Redeemer statue is an amazing feeling. Check out some clips of us in the “This is Rio” video: 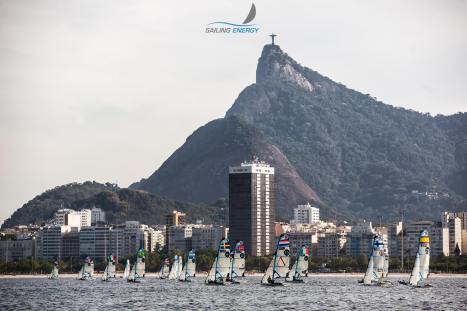 The US Sailing Team Sperry has so many resources in place for us to perform our best in Rio (weather, PT, chef, sport psych, many coaches, etc.). We are really fortunate to be part of a team of phenomenal people and we’ll continue to get as much knowledge out of them as we can! Also thank you to our coach Ramon Oliden, who is always pushing us to be our best in training and racing.

We’d like to thank our sponsors, Expedia and the Francis Sailing Foundation, and the sponsors and supporters of the US Sailing Team Sperry, including Sunbrella, Harken, McLube Marine, and Group Bénéteau, and especially our title sponsor Sperry. Thank you to the individuals who have personally supported our dream so far, and please stay tuned for our crowdfunding page which we’ll launch soon! 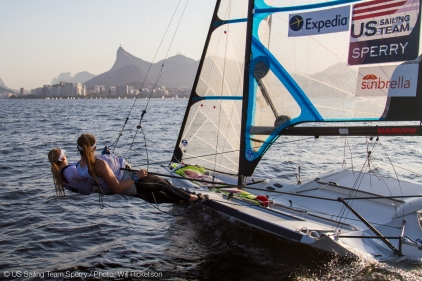 Our focus now shifts to a break from the water: the gym, fundraising, speaking to our communities, and preparing for the 2015 World Championships in Buenos Aires. Thanks for following! 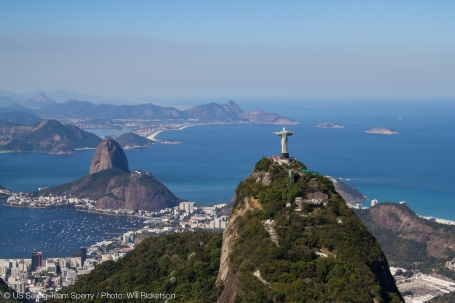 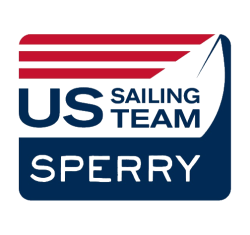